Happy New Year!! It’s 2019!! How does it feel? Some of us sprinted to the finish line of 2018, grateful to have made it in one piece. Some of us dragged our feet, reluctant to leave behind what was, perhaps, the best year ever. Maybe you’re unsure of where you stand on the whole prospect of a new year. The good news is, it’s only day one. 364 more days to make 2019 exactly as amazing as you want it to be.

I’m a resolution maker and a goal setter and while I can’t tell you what your new year should mean to you, I can share with you what I’m doing this year that I think we could all get behind in 2019. I asked for two books this Christmas, and then devoured them in the final 6 days of 2018, and they’ve helped me zero in on these five things that may not lead me to inner nirvana, but should at least help gently guide me on the path of health and happiness this year. More on the books later. You may want to read them too. But first, the things. My “resolutions” as they were…and for you, whatever you want or need them to be. Maybe nothing…or maybe a gentle to push to get in on the ground floor of making 2019 your most INKspired yet!

Take care of your muscles!
This is not working out more (see number two!) nor is it forcing myself to do yoga, with which I continue to have a love hate relationship. There are lots of ways to take care of your body that don’t involve twisting yourself into pretzel shapes in rooms warmed to sauna-like temperatures. I’ve never been flexible, and in my effort to become more so I’ve made many attempts at morning yoga routines, static stretching pre and post workout, and dynamic flexibility exercises. But do you know what actually makes my muscles feel really good? Do you know what actually allows them to relax and stretch fully and not ache after a hard workout? Working with a roller and seeing a massage therapist. Emphasis on working with a roller, which I don’t do enough. But it feels So. Frickin’. Good! And there in lies the resolution.

If you’ve never used a roller before you should know, the first time…and every time there after…will hurt. It will hurt in that really good, deep tissue massage kind of way, but it will hurt. If you want to know more about it, Breaking Muscle is a good blog to start with. You don’t need fancy tools to start with. My chiropractor first recommended laying on a tennis ball to find my pressure points, and it worked just as well as the $30 foam roller I bought a few months later. If you want the “tools of the trade” I recommend a roller like “The Stick” which let’s you work small muscle groups and hard to reach places, and a larger foam roller like “The RumbleRoller” for large muscle groups and your IT band. I did this every day over the holidays and everything felt better!

Workout quality over quantity
My new year is going to start with a lot of busyness. I cast a musical in the days before leaving for Christmas break, and we start rehearsals January 3rd, which will run three to four times a week until the start of March. Somewhere in there we’re also going to break ground on a new house, and then that will dominate the spring and summer on into fall when I’ll go back to work, but will also, very much, be wanting the house to be finished, and will be spending every spare minute trying to help get it done. 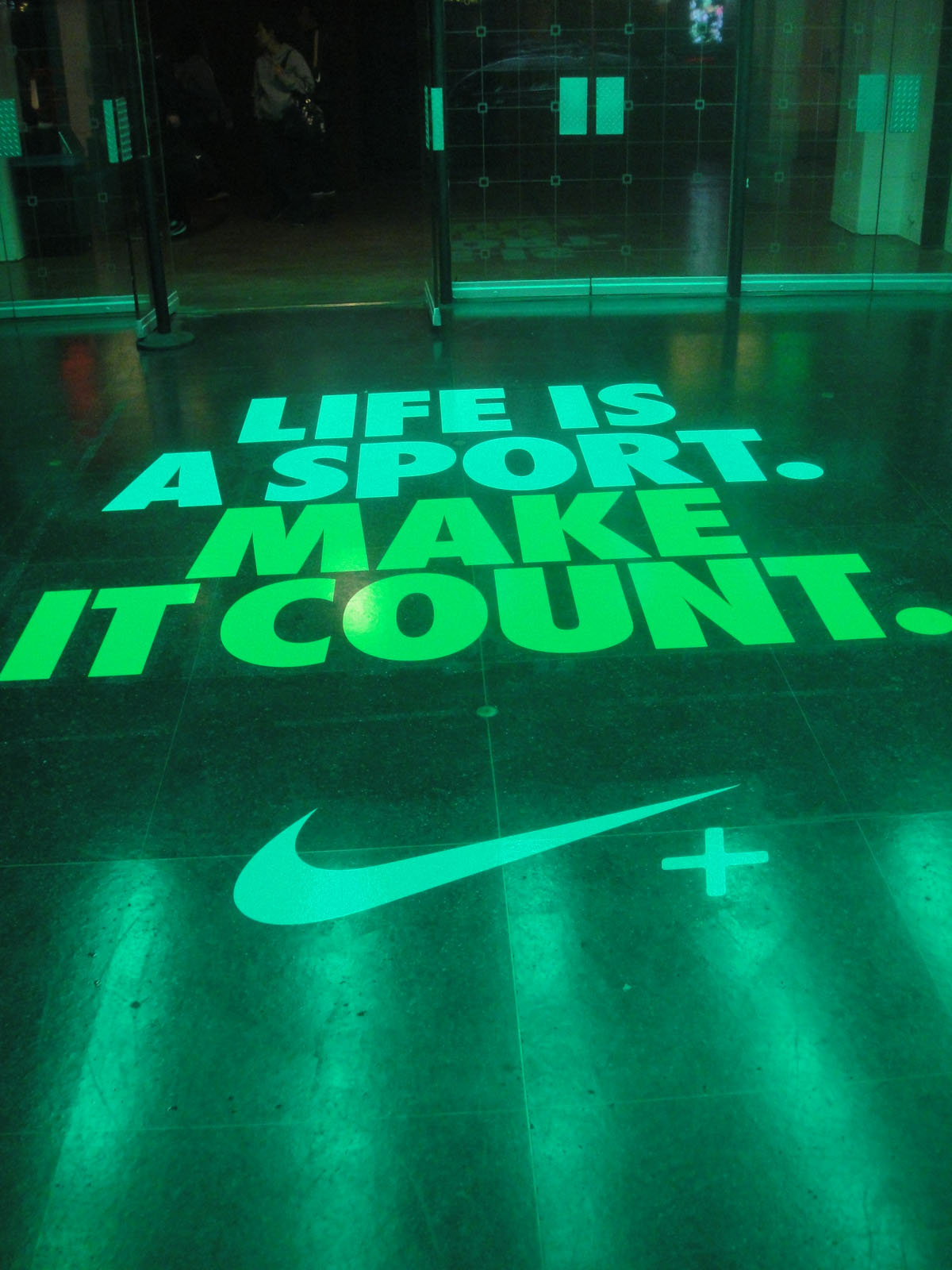 The thing is, I also like to workout, and working out takes time. In the summer I like to run and go on long bike rides, but winters in Minnesota aren’t super conducive to that kind of activity, and so I much more often end up at the gym, running on the treadmill and/or riding the spin bike. I don’t mind the gym, but the aforementioned busyness is going to make it a little harder to spend as much time there as I’d like. I had already started thinking about this when I put my rehearsal schedule together, and was still thinking about it when I was reading one of the two books that I received for Christmas when I read about the author’s (who runs her own company and runs marathons) workout plan for busyness. Two workouts a week that absolutely kick your butt, plus one or two power walks. This is a plan I can get behind. My favorite go-to for a workout that kicks my butt? Treadhills on the Nike+ Run app. I’d highly recommend it as a free download, plus if you have an Apple Watch or other smart wearable device, it will sync most of your health data. I’ll do thirty minutes intense cardio plus twenty minutes of weight lifting, and then it won’t matter that I don’t workout for a day or two because my leg muscles wouldn’t let me do it anyway! (And that’s where we come back to thing #1…lots of rolling!)

Read more
When I want to be, I can be a voracious reader. When I have a lot of other things on my plate, let the books pile up on my nightstand until I have an opportunity to ignore everything else and read with wild abandon. My husband is the same way. He read, I think, seven books on our sixteen day vacation. I read five and thought I was doing well. I’m through two and a half on my Christmas break, and I’ve got a few days left before heading back to work.

You know what I always seem to have enough time for when things get busy, however? Catching up on shows…or the occasional Netflix binge…or aimlessly swiping and sliding boxes and bubbles on my phone. Sure there’s a time and place for all of that, but I could make a time and place to read a bit more than I do, and I’d like to, because I do love to read. It was my husband who suggested that maybe this year in our free time, we watch one episode instead of two, or two instead of three, and use the extra forty-five minutes for something else. I immediately though, forty-five minutes I could read!! He…might have been thinking about something else! 😉 And nothing says I have to read every night… But MORE…I have to read MORE!

If you’ve got a great book on your reading list this year, I want to know about it. My first step is going to be clearing up a few lingering library fines, a personal vice of mine. After that, I’ll be starting with these titles: Bird Box, Educated, Spilled Milk, and Where the Crawdads Sing.

Spend less
We’re building a house this year, and everything is expensive. Things I don’t even think should be expensive are expensive, and when you’re footing the bill for everything, you really start to prioritize what you’re going to want to put down the money for and what things you’re content to spend as little as possible on. Unfortunately, my priorities for spending money on the house are not things like shingles and windows (both of which, deserve to have some cash behind them). My priorities are things like curtains, art work, and area rugs. These things all come at the end of the project, and the end of the project is when all the money has already been spent.

When we first got married my husband and I set an amount for purchases above which we would need to talk to the other about spending the money. We also talked about how much money per month we’d be willing to call discretionary. Discretionary cash is what I use at 8:30pm when I’m browsing my favorite online boutique and decide I just need to have that off the shoulder sweater (in two colors). It’s not an allowance per say. It’s just what fits in the household budget. This year we’ve decided to decrease our discretionary cash each month in effort to put more money towards the house upfront. It makes sense for us and what we want to accomplish by January 2020. It also gives me a chance to plan for those curtains, as we decided whatever is leftover at the end of the month will be set aside to be used when it’s time to finally go out and pick out those curtains! Pass me the piggy bank!

RELAX
Admittedly, I’m a worrier, and as I’ve stated previously, when I get stressed I’m prone to bouts of anxiety. So I’m always looking to channel my inner calm and tap into strategies to help me R-E-L-A-X! I know that putting on a musical will be stressful, and I’m sure that house building is going to push both Josh and I to our limits at times. Knowing this upfront is already to my advantage because I can be on the look out for the signs that I’m starting to get overwhelmed, but as for curbing those emotions once they crop up, well that’s the ongoing challenge of stress induced anxiety. Having just written about holiday anxiety strategies, I won’t bog you down with more tips to try, but having just read these two books (that I promise I’m coming to soon) I will say that two ideas have jumped out at me for preparing to the year ahead.

1. Scheduling when to worry. Since I can’t always stop the worrying, it’s suggested that setting aside five minutes a day to actually think about the things that bother you, and then letting them go the rest of the time, can be a very healthy way to give your brain a chance to fixate, while also allowing it to rest the majority of the time. I’m game to give it a go. 2. I got a fidget. Remember two years ago when fidget spinners were all the rage? They were annoying, but they were at least loosely based in a sound idea that having a fidget item can help to redirect the mind. Last month, the band broke on the Irish ring I generally wear on my left hand. In searching for a replacement, I discovered they made a version that’s a “spinner.” The design on the ring is on a separate piece that allows it to spin around the band. It’s a beautifully designed piece of jewelry and is a subtle touch point to occupy my mind and hands when things start to feel a bit frenzied.

If you’ve got a resolution for the new year, I want to hear it! What’s inspiring you to make 2019 your best year yet? What are your goals? Dream big friends, there’s a whole year left to make a dream come true!