I try to keep my reality TV observations to one post a season. Some of you are here for The Bachelor/ette tea to be spilled, and as my bracket busting, season watch party lady gang will attest to, I always have plenty of thoughts about what’s going down. However, many of you are also thinking, “Oh no! She’s talking about The Bachelor again? Can’t we have more pizza recipes and wine recommendations?!” I get it, reality (a term used very loosely in this case) love stories are not for everyone, so thanks for bearing with me.

So let’s talk about falling in love! There’s a moment on each season of The Bachelor/ette where the contestants start to confess to the lead that they’re “falling in love.” There’s then a second moment at some point in the season when someone comes straight out with “I’m IN love with you…”, which is generally met with an awkward smile by the leading man or lady who is supposed to keep it under lock until the finale who he/she has fallen for. They say something like, “I’m so glad you told me that…” which is not the reaction most of us would hope for after our declaration of such feelings.

Unfortunately, by the finale, the lead generally confesses to some producer and camera crew that he/she is in love with both of the finalists, and they don’t know how to choose. Inevitably, they pick a “winner,” and there’s a proposal, and not once on camera does anybody wax philosophic about the fact that it’s weird that a few hours earlier the lead broke up with another person that they supposedly loved, to propose to the person they…loved more.

This is probably why more bachelor leads have married their runner-up lady than their winner. If absence makes the heart grow fonder…and you realize after you dump one lady that you miss her more than you “love” the lady you’re with…you may realize you were only ever “in love” with one person all along. Or perhaps, more accurately, you had the potential to fall in love with one person outside of the crazy world of the franchise.

This isn’t the first time I’ve spilled some ink. about falling in love on the show. The main premise of my previous thoughts boils down to:

I stand by that assertion. I believe the men and women of The Bachelor franchises believe they are falling in love because they’re dropped into circumstances in which it’s easy to feel like you’re falling in love. I also believe that once they leave the show, it becomes clear pretty quickly whether that attraction and whether those feelings were genuinely for the other person, or whether that attraction and those feelings were the product of the situation in which they lived for nine ten weeks. There’s no shame if it’s the latter. After all, the show is designed to make people feel things for each other. But that probably also speaks to why so few contestants and leads wind up at the altar.

When the first contestants declare they’re in love with the lead contestant, there’s always a lot of groaning and eyerolls at our watch party. It was no different this year, and as we 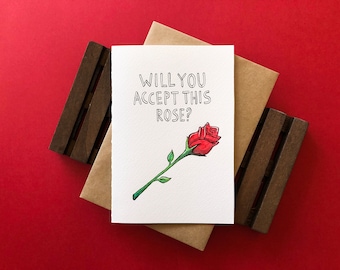 headed towards Valentine’s Day, I began to wonder that, if we believed that the women on the show could not possibly be “in love” with the Bachelor after only four weeks (and while they watched him date 30 other women), how does someone realistically know that they are “in love”?

I posed that question to my friends and the ink. community on the blog’s Facebook page (follow on Facebook here), and I got all kinds of responses. Here are just a few of the ways people said they knew they were in love. Most people requested names be changed in their stories. Those requests have been honored.

Marcia and Jim
I knew that I was in love with my husband Jim when I almost lost him. He was involved in a car accident and was transported to the hospital while still unconscious. They didn’t know the extent of his injuries when I got the call from his parents. But I rushed there to be there when he woke up. Seeing him in the bed and knowing I almost lost him was all I needed to know about how I felt. I told him I loved him before he was discharged four days later.

Bob and Rebecca
I broke up with Rebecca shortly before I moved two states away for work. I thought it would be best for both of us because we wouldn’t have to do long distance. I also thought that we hadn’t really developed those kinds of feelings yet, so the breakup would be easy. That’s not what happened. The breakup was terrible. I felt awful without her. Not only was I in love, but she was the person I wanted to spend forever with. The first time I went home. I went to see her and told her I loved her. We were engaged two months later.

Katelynn and Ryan
Hindsight is 20/20. I now know it was love back in our friendship days because of who much I looked forward to our lunch dates, how we could get lost in conversation for hours, how his opinion was always the one that meant the most to me, and how hard it was to be without him. Others would comment on our chemistry…even strangers! All the signs were there, but the timing wasn’t right. I knew I was in love with my now husband after several other partners failed to make me feel the way I did with him, even before we had crossed the romantic line. It’s an internal pull to him, and a sense of security when I’m with him. The idea of not having him in my life is scary and painful.

Ashley and Chad
Chad and I aren’t married (yet!😅) but he will tell you that he knew it was love when the sex was incredible. He’s not wrong. But for me, it was when I saw him interact with my dogs and my baby niece and nephew. He’ll be a great dad someday.

John
With my last girl friend, I just knew. It was six or seven months into our relationship, and one day I went to her apartment to pick her up. She came down the stairs and out the front door walking towards my car. Suddenly it just struck me how amazing she was. I must have had a funny look on my face when she got in the car because she asked me what was wrong and I said, “I love you!”

My husband would likely also be in the camp of “I just knew.” When I asked him, he couldn’t come up with a specific moment, though we did reminisce over the first time he said “You know I love you, right!?” to which I responded…”Oh! I…think…I love you too.” It was a very articulate moment for both of us. In truth, however, I didn’t really need to say, “I think…” I knew a week earlier when he called me while driving home from a conference with a group of guys. We were still a long distance couple at that point, but they stopped about ten minutes away from my apartment on their way back to Minnesota, and he called from a gas station to let me know where they were, but also to say it was late (and he was with other people) so he wouldn’t be able to stop. I realized in

that moment how much I missed him, and at the end of the phone call, it almost slipped out. I caught myself…and then tried to Jedi mind trick him through the phone to say it first. He didn’t. But a week later, we got to the aforementioned awkward exchange on the couch.

So what did this social experiment reveal about being “in love.” Well, if you take the sum of the stories I collected, being in love means that: you miss the person when they’re away and fear losing them because the sex is incredible, which leaves you with this feeling of just knowing! Ok, that’s probably not what it means at all. But one thing was clear about the stories that were shared with me, they were all about realizing that one person was the person. And here’s where I feel bad for the lead on the The Bachelor. All the contestants have to do is sift through their feelings to figure out if the one person they’re competing for is the one person they could be with. Do I believe that they can fall in love? Only to the extent that love exists in the bubble of reality TV. For the lead, however, he has to sift through feelings for 30 women, figuring out if among them, there might be the person, and they have to do so without the filter of real life!

All the stories shared with me included the filter of real life. Travelling for work, facing a health crisis, missing a person over long distance, interacting with families and pets, day-to-day living, sex…these are the things that framed the feelings of the people in their relationships. Most of these things are not contributing factors to the crucible that is The Bachelor. Does that mean there isn’t love on the show? Probably not. I think you can love someone to the extent you care about them, are attracted to them, want what’s best for them, don’t want to hurt their feelings, want to see them happy, etc. Is that the same as being “in love” with someone? I’ll say this much…I believe a lot more in the love stories that were shared with me this week than I do about the love stories that play out on reality TV.

So, Valentine’s Day, and while reality love stories may not be for everyone, love stories, in general, should be for everyone! Do we need to be “in love” to appreciate the holiday? Well, it’s great if you are! But, we should all love someone, be it ourselves or someone else. So if you’re shunning V-Day out of spite, either because you don’t want to buy into a Hallmark holiday (and it’s not really, I mean, it’s a saint’s feast day!) or because you don’t have a special someone to share it with, I’m going to challenge you to take heart in this day of hearts. The world produces hate 364 days of the year, but one is set aside for love. Don’t let it go to waste!

If nothing else, love the fact that chocolate is going to be 80% off tomorrow…just in time for your weekend!