Not everyone is going to be quite as excited about this first point as I am, but I also know I’m not the only one excited that finally, after two years of waiting, the final season of Game of Thrones starts this Sunday! Winter has come and gone and come again since we were last treated to the dealings of the Starks, Targaryens, Lannisters and White Walkers as they battle across Westeros for the Iron Throne. 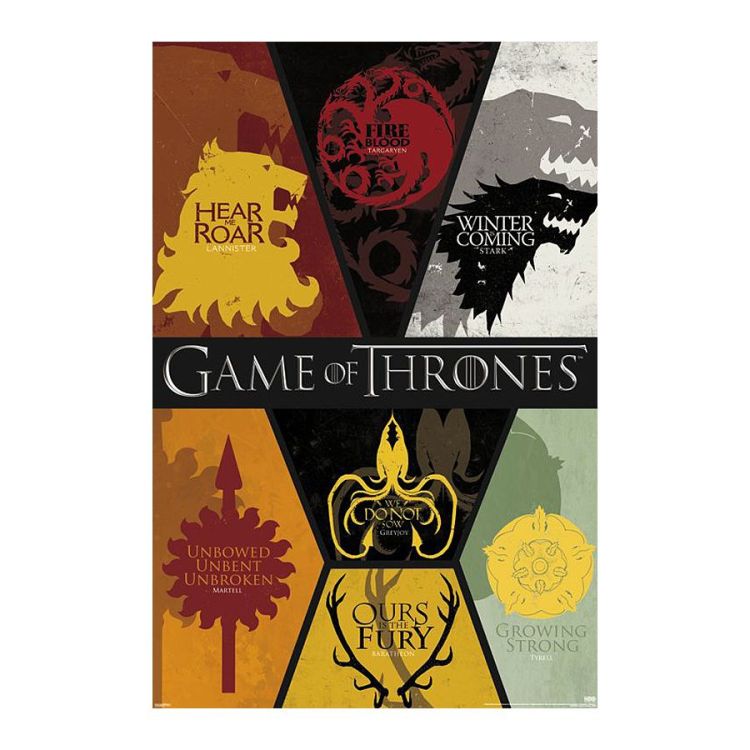 Whether or not you watch the series, you should be prepared that, come Monday morning, anyone you know who watches will be talking about it. Also, probably prepare yourself for a social media onslaught of Twitter posts, Instagram stories, and Facebook statuses not just this weekend, but the next six weeks as characters die, houses crumble, and someone eventually wins the game of thrones. For those of us who have hung on for eight years of torment, it’s going to be an intense six weeks!

Having just finished rewatching all seven seasons of the series in anticipation of the finale (and in a futile effort to look for new clues as to what the eventual outcome may be), here are a few refreshers for either those of you who watch the show, or those of you who want to have just the smallest inkling of what all the fuss is about this weekend.

Currently sitting on the Iron Throne:

How she got there:

Season 1: Cersei’s husband, King Robert Baratheon, dies in a boar hunt. Joffrey Baratheon (actually Joffrey Lannister, born of the incestual relationship between Cersei and her brother Jamie) takes the throne. In season 4, Joffrey dies at his wedding feast, poisoned, we later learn, by his new wife’s grandmother. His brother Tommen takes the throne and eventually marries Joffrey’s widow. When she dies in an explosion orchestrated by Cersei, Tommen throws himself from a window in his grief. Cersei takes the throne as Queen Regent, and currently rules Westeros.

Those who claim to have a claim to the throne:

Daenerys Targaryen – believes she’s the rightful heir to the throne through her family line which was usurped when her father, the ‘Mad King’ was killed by Robert Baratheon. Played by Emilia Clarke who’s widely recognized for her character’s platinum blonde hair, she’s also the one that rides the dragons.

Jon Snow – aka Aegon Targaryen – the actual rightful heir from the Targaryen line, who doesn’t know it because he was raised in Winterfell as Ned Stark’s bastard son. This gets strangely complicated as he’s now formed an alliance…and slept with…Daenerys, who’s really his aunt. She likely wont take well to the news that he has a better claim to the throne than she does.

The Night King – The commander of the army of the dead who was created when a shard of dragon glass was shoved into his heart. It’s possible that he can’t die…or that he can, and when he does, the entire army of the dead will be defeated. Currently, he’s riding an ice dragon across Westeros like a boss and looking kind of indestructible. If he wins the throne, it will be because everyone in Westeros is now a zombie soldier under his command.

Others who don’t really have a claim, but could survive long enough to take the throne anyway:

Pretty much any other person in the series. Honestly, the book series was crazy twisted and complicated, and the series just picked up where George R.R. Martin left off, leaving no character, no matter how beloved by fans, safe. Sansa Stark, Tyrion Lannister, Euron Greyjoy, Sir Davos, Jamie Lannister, Brienne of Tarth, Arya Stark…it wouldn’t really surprise me if any of them wound up “winning” in the end. Then again, it wouldn’t really surprise me if any of them died in the first episode either!

If you watch nothing else:

See if you can get yourself in front of a screen for episode 3 of season 8. Even if you don’t know a thing about the series, Episode 3 is supposedly the epic battle between the armies or the living and the dead. If you appreciate film making or cinematography at all, this episode is said to be a masterpiece as it breaks the record for the longest consecutive battle sequence, and took 11 straight weeks of filming consecutively night after night to acquire all the necessary footage!

If you have friends who show up for you even when they’d rather be doing something else, you literally have everything you need in life!

Game of Thrones fans, this is our weekend! Finally.

Happy Birthday to Cece of ‘On the Couch with Cece LICSW’ And is it possible that I missed my girl Kim’s birthday two weeks ago? Perhaps. Sometimes I drop the ball. Happy belated!

Lost in the sex, violence, and fantasy of Game of Thrones is a line of wine commentary that runs pretty deeply throughout the series. There’s actually a page devoted to the wines of Westeros on the “Wiki of Ice and Fire,” the Game of Thrones encyclopedia. The Arbor is repeatedly mentioned in the books and show as the predominant wine growing region, producing the well-known white wine “Arbor Gold” which is widely distributed through the south and King’s Landing. Conversely, Dorne is known for its “Dornish reds.” Strongwines from Dorne are described as dark as blood with a sweet aroma and taste.

In that theme, this week, we’re picking  a big, bold, brash, red to set the tone of our Sunday night season eight kick off. The Federalist Zinfandel is a lush, complex red wine with notes of stone fruit, cinnamon, spices, caramel and cocoa. Complex fruit flavors unfold slowly through the sip, and the finish lingers a long, long time. It’s in that long finish that I really picked up on the caramel and cocoa. The word used to describe many zinfandels as a type is “jammy” and this bottle is no exception. The Federalist has a plush mouth fell, with mouth watering fruit flavors that burst on the tongue. At almost 15% abv it’s a bit on the strong side. Pair with sharp cheeses as an appetizer, or with bitter dark chocolate as a nightcap/dessert.