There’s a lot that can be said about the effect of social media on mental health and overall happiness. Just take a look at some of these headlines:

The more you use Facebook, the worse you feel!

Is everyone happier than you on social media

The more miserable you are, the happier your social media If you’re on social media, it shouldn’t come as a surprise that everyone always seems to appear a little more #blessed than you might feel at the moment. And your own social media might reflect a bit more of your own life’s silver linings than storm clouds. Still, even though we’re aware of the comparison factor on social media, and even though we can curate our own content to look any way we want, it’s hard not to look at every perfect pose, elaborate meal, fantasy vacation, and influencer turned millionaire with a bit of envy and ennui. And that can take its toll!

What’s more, is that intentionally or unintentionally, social media has created this kind of social time capsule that preserves the content we created in the past, for all future iterations of ourselves, friends, and family, to review in perpetuity. There can’t be a politician, future business leader, teacher, athlete, celebrity, etc. coming out of the millennial generation that isn’t worried, in some capacity, that some dumb thing that they once shared or posted online won’t come back to haunt them tenfold as an adult. In fact, even if we’re not living in the public eye, that time capsule effect can still play out in our own lives, as Facebook will send us a daily reminder of what we did “on this day” every year since our profile login.

I’ve always liked looking back at my Facebook memories, but a few months ago, I realized something about them really started to bother me. My Facebook account has been around since back in the days when you had to have a college email address to get a profile, and what Facebook is used for, and how people are using it, has changed a lot. Thus, when Facebook opens up my vault of memories, the ones that come spilling out from…13 years ago…are, in truth, kind of dumb!

Remember when, for a while, people wrote their statuses as if they were trying to finish the third person phrase “Kate Laack is…”? Almost daily I have a Facebook memory that’s some iteration of a third person musing.

Remember when, for a while, people used song lyrics in place of their statuses? At least once a week, some variation of Colbie Callait or Corrine Bailey Rae or, inexplicably, Journey lyrics show up in my memories.

Remember when things that you cared about A LOT 13 years ago became really embarrassing and trivial by today’s standards? I do…every couple of days when Facebook reminds me.

It is possible, that in the light of another 15 years, even this blog might sound ridiculous. But what Facebook does by showing you your daily memories since the beginning of your social media time, is reminding you on the daily just how trivial, embarrassing, or just downright dumb you once sounded. And I realized, that looking at my daily memories was becoming less nostalgic and more self-critical.

This is when I discovered a social media hack for happiness that is one of the most satisfying things I’ve done since purging the friends from my account that spewed hatred and fake news garbage all the time!

Every day when my Facebook memories pop up, I click through them and DELETE everyone of them that makes me feel stupid, embarrassed, or otherwise bad about myself in any way. This includes untagging or deleting unflattering pictures. This includes getting rid of those dumb third person posts. This includes laughing at song lyrics I thought defined my life and then saying goodbye to them forever with a click! I know in the vast expanse of the internet they’re probably not really gone forever. And I’m sure if I was going to run for president, somebody somewhere could drag up an old post that says something dumb. But for the day to day, there is something really really satisfying about looking at some old joke, old status, old photo, etc. and saying this isn’t me anymore, and watching it disappear! 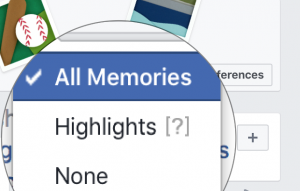 Which is not to say I’ve deleted everything that pops up! There are lots of memories that come up that are lots of fun to relive and look at again…which is what the memories feature should be! Nostalgia and self-loathing should not be the same thing!

So if you’re in the social media realm, I implore you to utilize it only in ways that bolster your happiness and enjoyment and curate away the parts that no longer serve that purpose. While we can’t change the past, we can change which parts of it we choose to relive on a daily basis, and doing so can make those memories a lot more fun to relive! Honestly, most of the things I delete are memories that were already long forgotten about in my life and have very little bearing on anything I’m doing today. It feels good to let them go from the digital place where they linger.

Don’t be haunted by a digital version of your past stupidity! Click delete. It feels good!